On Tuesday morning, jet lag got the better of Vale, who woke up at 1:00 am or so, ready to roll. I breastfed her, then Kyle took her out and about and let her get some energy out at two playgrounds, one in my parents’ condo complex and then another down the street. 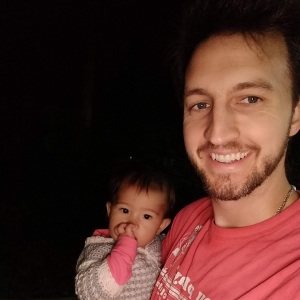 Vale was able to sleep when they returned, but woke up early again, probably around 4:00 am. This time we all got up together, and we took her down to the play structure in the courtyard of my parents complex to play for a little bit. This was far too thrilling, evoking shrill laughter from Vale, which attracted the attention of the security guard, who advised us screaming children should not make use of the play structure at 4:00 am when others are sleeping. Below is a video of her playing yet again later in the day around 8:00 am.

After being chased off by security, we headed to good old 7-11 for coffee and snacks. We enjoyed our coffee and seaweed rice roll on a bench in a grassy field at the university campus nearby, under trees, the leaves of which were shuddering and whispering in the morning breeze. After (really early) morning provisions, we had a morning run around the campus at about 5:00 am.

Later in the morning at about 8:00 am, we made our way to old town SanXia (三峽), and enjoyed some street treats. We bought a basket of steamed dumplings for only 40 NT (~$1.33), which Vale actually ate, and fresh squeezed orange juice for 60 NT (Jenn’s favorite). The orange juice is sweet, balanced, and perfect, like a taste of liquid heaven and Vale liked it too.

There was a bustling market right outside old town, full of fruit, food, and clothing vendors, though most shops in old town itself were closed. We wandered around the main strip there anyway, since the space was nice and calm for Vale to explore. We had some cold noodles and stewed meat with rice (滷肉飯 – this was so-so). We found some benches in the shade outside an elementary school and ate our food while vale played in the gutter.

Afterwards, we encountered some beef noodle soup, Si Chuan (四川) style (real 四川 people might disagree on authenticity). We couldn’t resist and shared a bowl. It was yum balls and only a little over $2. 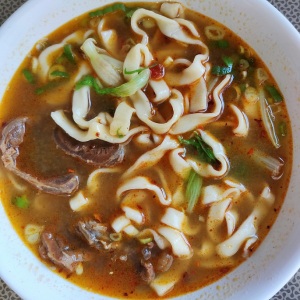 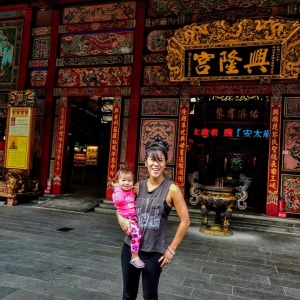 After our very productive and long morning, we returned home, took a break, and Vale hung around with Grandma and Grandpa before we headed off to our next excursion. Kyle took a long-overdue nap at this point. 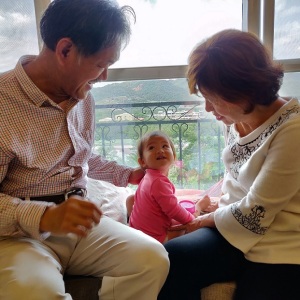 Dad drove us about 40 minutes away to a national park called Man Yue Yuan (滿月園). We arrived around 2:00 p.m., but realized upon exiting the car that we had misjudged the mountain jungle weather. While it was still relatively warm in the city, there was definitely a chill in the mountains, and we did not bring pants for Vale. We hiked through the forest along a small creek, up some steep steps, until we reached a gigantic water fall. 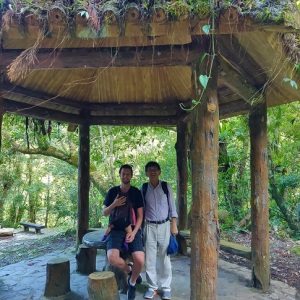 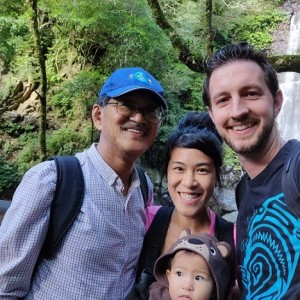 Before this trip, I had never been to Taiwan during this time of year, and it was nice to enjoy the greenery, forest, and the peace of nature without having to deal with the intense tropical heat and humidity (which still, in retrospect, is nothing like Vietnam, however). The coolness of the mountains during this hike was something new and refreshing for me.

Vale napped a bit on the way up, but woke up just in time to enjoy the view of the waterfall. We let her toddle around a bit on the way down, and she had a blast. As usual, she was thrilled about getting tossed in the air by Daddy. We were admonished by a nosy person who warned us throwing children is dangerous, but we ignored him, like we did the woman who scolded Jenn at Mi Rancho Market about Mexican kidnappers.

After the hike, we went home, showered, and joined some family friends for dinner at a nearby restaurant, only walking distance away. Lucky for us, Vale fell asleep on the way and slept all through dinner, which featured numerous dishes, including braised pork and squid, winter melon soup, chicken marinated in wine, meatballs, red bean soup, among others.