On November 24, if we recall correctly at this point, we started the day as we had been – coffee at a convenience store and Vale playing in the playground for a bit. Jenn could not resist and bought some Morinaga caramels. Vale did not have a good breakfast, so we fed her these instead. Every child loves these, and for once, Vale was no exception.

After our morning routine, we took a quick Uber ride through some very windy, narrow, rural roads through to Da Xi old street. We figured this was a place we could check out and explore without having to deal with the hassle of traveling very far with a toddler. The ride weaved through hills and jungle, which seemed sudden, and out of place, as we were not at all far from the city.

As soon as we showed up, we began to eat. We sampled all kinds of pickled/marinated side dishes at a storefront right where the old street area begins. The pickled dishes, including green papaya, seaweed, cabbage (similar to kimchee), were all delicious, and we ended up buying a jar of the spiciest seaweed. Next, we had a couple of good kabobs. The first was pork (left, below), peppered with sesame seeds. This was good, but not as good as the spicy chicken (right, below), which had a hint of lemon or some kind of citrus/acid, and was very tender.

We also got a couple of different types of bao zi, which Vale liked quite a bit. She picked out all the meat out of the bun (even though the fluffy, carby bun part is awesome). She tried a vegetarian version of bao zi as well, one filled with mei gan cai (marinated mustard greens), and also enjoyed it, which was surprising. Jenn bought a small bag of marinated bean curd, which was delicious. We were not aware, but apparently Da Xi is famous for having good bean curd. 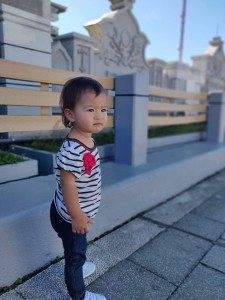 After eating our fill, we ambled across a scenic walking bridge, and let Vale play at the playground at a park nearby. However, the park was extremely hectic and crowded, so we didn’t stay long. We found another park near the river, and walked 30 minutes to get there. Once there, Vale had a grand old time on all the playground equipment. She hung from the monkey bars until she dropped and Kyle would catch her. A small local boy said “very good” and Kyle said something in Chinese which we don’t remember now and everyone laughed.